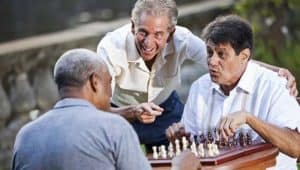 The brain controls many aspects of thinking—remembering, planning and organizing, making decisions, and much more. These cognitive abilities affect how well we do everyday tasks and whether we can live independently.

Some changes in thinking are common as people get older. For example, older adults may have:

Aging may also bring positive cognitive changes. People often have more knowledge and insight from a lifetime of experiences. Research shows that older adults can still:

As a person gets older, changes occur in all parts of the body, including the brain.

These changes in the brain can affect mental function, even in healthy older people. For example, some older adults find that they don't do as well as younger people on complex memory or learning tests. Given enough time, though, they can do as well. There is growing evidence that the brain remains "plastic"—able to adapt to new challenges and tasks—as people age.

It is not clear why some people think well as they get older while others do not. One possible reason is "cognitive reserve," the brain's ability to work well even when some part of it is disrupted. People with more education seem to have more cognitive reserve than others.

Some brain changes, like those associated with Alzheimer's disease, are NOT a normal part of aging. Talk with your healthcare provider if you are concerned.

The brain is complex and has many specialized parts. For example, the two halves of the brain, called cerebral hemispheres, are responsible for intelligence.

The cerebral hemispheres have an outer layer called the cerebral cortex. This region, the brain's "gray matter," is where the brain processes sensory information, such as what we see and hear. The cerebral cortex also controls movement and regulates functions such as thinking, learning, and remembering.

The healthy human brain contains many different types of cells. Neurons are nerve cells that process and send information throughout the brain, and from the brain to the muscles and organs of the body.

The ability of neurons to function and survive depends on three important processes: